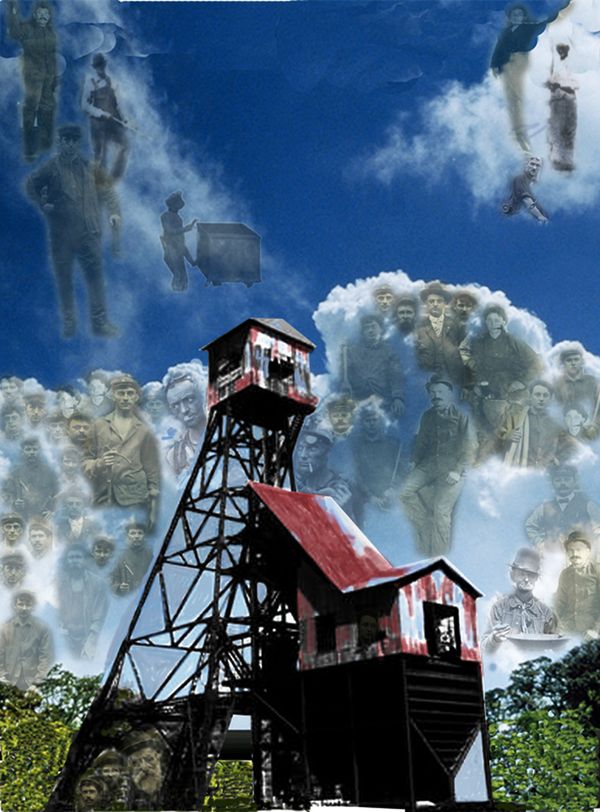 Kennedy mine head spirits of the miners on there way out from the argonaut "Spirits over Jackson"
The photos I used to create this work are of the miners and the firefighters that tried to save them.
The Argonaut produced 1.13 million ounces of gold valued at $25.7 million . The Kennedy reaped $34.3 million in gold elevated through three main shafts and lesser ones during its 90 plus years of operation.


Argonaut Gold Mine, On the anniversary of the  Argonaut Gold Mine Disaster, That took place in 1922 I was moved to create this work about it. Here is some history on the event.
On the night of August 27, 1922, 4650 feet below the surface of the earth in one of America’s deepest and richest gold mines, 47 miners were trapped when a fire broke out in the mine’s main shaft. For 22 days, friends, family, and co-workers waited anxiously as rescuers attempted to tunnel across from a neighboring mine. The story soon became spellbinding front page news, as reporters and film crews from across the nation descended on the little California mining town that was home to the Argonaut and Kennedy gold mines. It was the worst gold mine disaster in the history of the United States, yet the story was relatively unheard of before the recent publication of the book 47 Down: The 1922 Argonaut Gold Mine Disaster, by author-historian O. Henry Mace. this book is for sale on amazon.
and from wikipedia

On August 27, 1922, forty-seven miners, mostly immigrants from Italy, Spain, and Serbia, were trapped in a fire 4,650 feet (1,409 m) below ground. Other miners who had been near the surface poured water down the shaft in an attempt to put out the flames. By dawn, townspeople and other miners arrived to help, but it took two-and-a-half days for the fire to be extinguished.

Rescuers began re-opening tunnels from the Kennedy Mine which had been closed since an earlier fire in 1919. It was slow going, but hopes remained high until September 18, when a canary inserted beyond a bulkhead by oxygen-tank-equipped workers died. Still, it took three weeks to reach the level at which the miners were trapped. None survived, and evidence indicated that they had all died within hours of the fire's breaking out. One of the bodies was not recovered until a year later. Most likely, water flushed down the shaft carried his body further into the mine, but in the intervening time, newspapers speculated he had fled the mine to start a new life.

It was determined that the mine had violated safety regulations, but the owners escaped punishment, as the United States Bureau of Mines had little enforcement power. The cause of the fire was never determined and put down to "incendiarism," a broad term meaning either arson or defective wiring.
There are many back sorties and if in the area tours  are held during the season 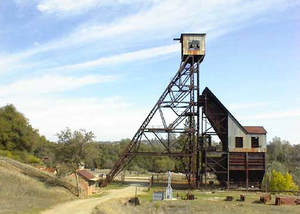 link will take you to the site...


For many years I lived as if I were down in a mine. sometimes I start t o think that it was my brainpower and talent and hard work that got me out..But....there was also allot of luck and perhaps some divine intervention. Many of my friends never saw the light of day, because they had none of those factors. This piece of art will serve as a reminder of what, easily could have been. 17 years ago I was ready to die, a stinking drunken miserable addict. Glad I made it out of the mine ! (or should I say, Mind)
Love, Ken

I have to believe the miners would be glad to help Ken! Here is a video of Kens Music his gift to the world now days..