SPAH Diversity At it's Best

How many types of Harmonicas are there? I say as many as needed for the many types of music it is used for. Harmonicas come in all shapes and sizes, it is mind boggling.  At SPAH each year all types are showcased.
A Diverse group of players from around the world come to perform, share, learn, teach and just hang out with other players - like a pilgrimage of epic harmonica proportions!

1:Diatonic:The standard 10-hole major diatonic harmonicas come in all 12 keys of music and allow you to play a complete 7-note major scale of the key of the harmonica.

3:Tremolo harmonicas are Diatonic models constructed with double holes (sometimes 8, 10, 12, or more sets of double holes), each containing two reeds tuned to the same note, one tuned slightly higher than the other. Since both reeds are either blow or draw, when played, both will sound together and the slight difference in tuning creates a vibrating or tremolo effect. "Octave harmonicas are similar to Tremolo models in reed layout and musical range. Instead of having reeds tuned to the same note, however, each double hole has one reed tuned an octave apart from the other. The resulting sound is stronger and full bodied, but without the tremolo effect.

4+:For players that do not play chromatic harmonica, but may have the need for additional notes and scales in they're playing, they can pick up a special tuned (actually re-tuned from the standard major scale tuning) diatonic. Tunings include: natural minor scale, harmonic minor scale, major scale 2nd position tuned (Lee Oskar calls them "Melody Makers" and Hohner calls them "Country tuned"), and "high octave" (key of "G") and "low octave" (low D, Eb, E, F, and F#) tuned.

5:Bass harmonicas, The Bass is actually two separate bodies, with one placed above the other, with the two held together by hinges on both sides, allowing you to angle the two mouthpieces in towards each other, or out away from each other.

The bottom row has all the natural notes - it's just a C major scale, running from E to E.

Well, the primary activity in most simple bass lines is to play the root and the fifth of the chord. It's easier to move between these notes if they're on the same row. Most chords have perfect fifths. The C scale does not give you a perfect 5th above B (F is a diminished 5th). B doesn't even occur in the C# major scale, so this would be a poor choice. The B major scale would not give you a perfect 5th on (or Bb), so that's out, too.

It just happens that the C scale and the Gb scale in combination give you all the perfect 5th on one row or the other.

Here is the layout for the regular bass:

Note how the hole placements are staggered, to put the flat/sharp notes in between the natural notes.

6:Chord harmonicas, Chord is actually two harmonicas hinged together. The player has access to 48 chords. The top section plays major chords on blow and 7th chords on draw, while the lower unit plays minor chords on blow and alternate draw chords between augmented and diminished. This model also uses windsaving valves to maximize airflow to its 384 reeds!

7:Polyphonias have a blow and draw reed, which are tuned to identical tones. They contain all 12 chromatic notes in a single line, allowing users to play notes in rapid succession without redirecting airflow. They are also capable of playing glissandos, a technique where successive notes are played seamlessly to create a sliding sound.

and miniature 4-hole many listed and played here by Ken.  Now the harmonica Lady me Nedra here is a link to my face book page 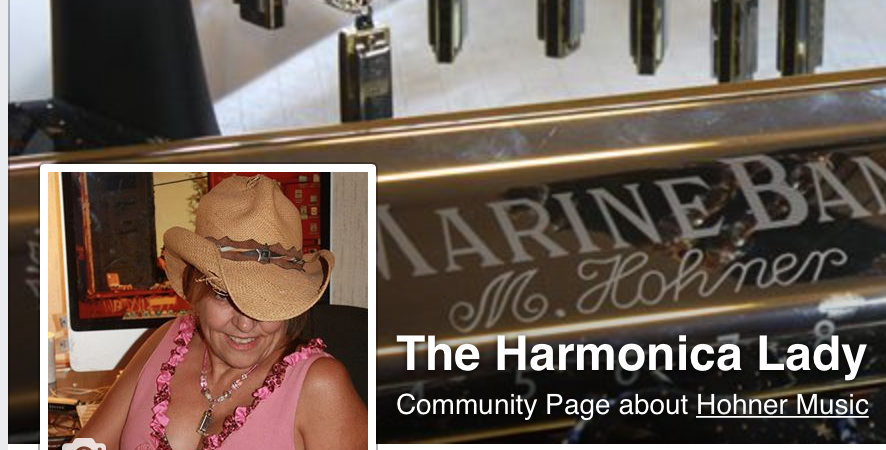